There was a time that no matter which Chick-fil-A you visited, customer service was WOW.  It was a standard of sorts.  That’s why I was taken back by my latest experience.  After placing my order at a local Chick-fil-A, I drove up to the next station and stopped.  The attendants were in their cubby having a nice chit chat.  I called to them to get their attention and asked where I paid. One of the attendants turned and responded “You can pay here”.  She then went back into the store to get her clipboard and payment gadget.  There was only one other car in line and we both waited patiently for our orders.  I paid and was given my bag to which I said “Thank You”.  The attendant mumbled something that sounded like “My Pleasure” and left.  Really?  That’s the new Chick-fil-A?  Don’t get me wrong, the food is good but I think what people like to rave about is the friendly and caring customer service.  Without that, they are just another fast-food chicken joint.

Customer W.O.W. Ask Me How 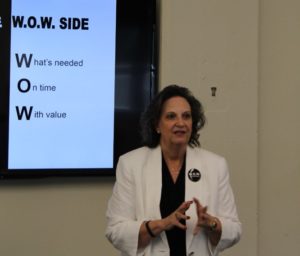 Subscribe to a CUSTOMER W.O.W. Ask Me How workshop and learn what it takes to deliver Customer W.O.W.   Contact Gianna to schedule your workshop today!

Creating a culture of W.O.W. requires a passion for being the best at what you do best. It’s achieved by providing customers What’s Needed – On Time – With Value. Some companies get it. Others don’t. Join me for a “Walk on the W.O.W. Side” as we share stories about WOW and not-so-WOW experiences and explore how you too can “Be The WOW”.

Order Your Copy today at Amazon or Barnes & Noble